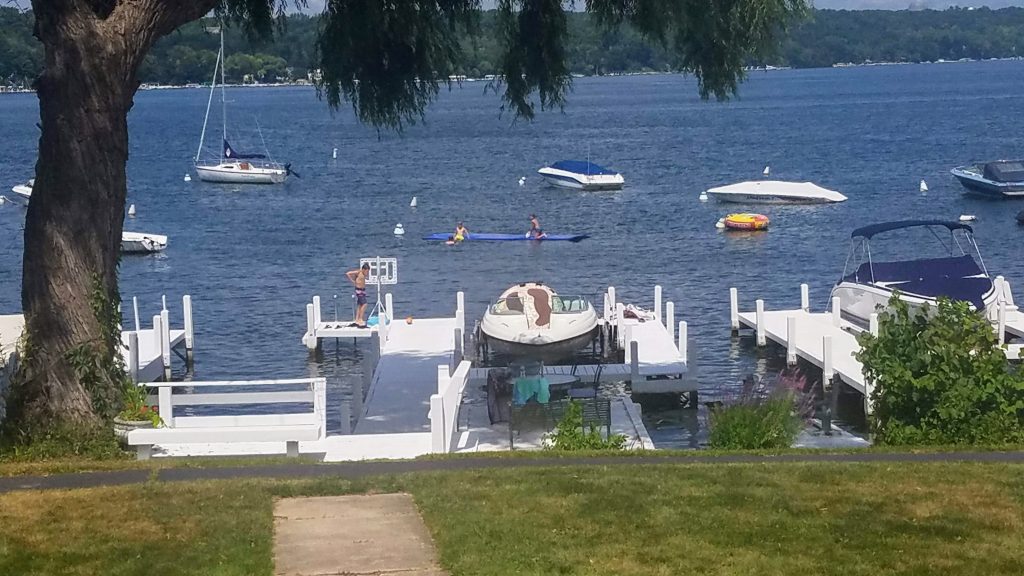 Considering that we live in the flatlands, there is no more challenging local ride than circling Lake Geneva, WI by bike. That makes it the perfect terrain for an electric bike.

The ride around the lake is about 21 miles. There are some really steep hills, the most severe of which is a three-level hill that rises up like Mt Everest (maybe not that steep) when you leave Fontana by Reid Park and ride up North Lake Shore Dr. (not 67) toward Williams Bay.

I called this my “barometer hill” because when I was running a lot, if I could make it up without stopping then I knew I was still in decent shape. I do not suggest running or riding up this hill if you are hung-over or if it’s really hot because it will get you.

I also used to ride my road bike around Lake Geneva and, long ago, could do it in about 1 hour. That was awhile ago, and now it would be much longer than that on a road bike. (I would not recommend riding around LG on a hybrid or mountain bike because it’s too steep.)

Last week, it was pretty hot in the morning (85 degrees by 9 am) and I went out to ride around the lake on my E-Motion City Pro electric bike. I forgot to charge it, so it was on 55% battery when I left. Starting in Fontana by the Abbey hotel, I went up the barometer hill with the electric assist on level one. I made it up, but was breathing very hard at the crest. Some people say electric bikes are “too easy,” but that’s not true. Electric bikes let you control how hard or easy you want the ride to be. Hills like this are enjoyable on an e-bike and not spirit crushing.

It was mostly downhill through Williams Bay to Highway 50 on the north side of the lake. This is a 4-lane highway. Sounds intimidating, but it has a huge, well-maintained shoulder and it is mostly uphill to Lake Geneva, which was easy to handle on level 1 of electric assist. Going uphill on this stretch I rode about 19 mph which is pretty fast, thanks to the e-assist. Then, a huge downhill welcomes you into the town of Lake Geneva. Top speed on this hill was 32 miles per hour!

The town of Lake Geneva is overrun with touristas and cars. Be careful riding through there between noon and 5 pm on a weekend. It was early, so that morning not too bad. There is a cool bike store/coffee shop there called Avant Cycle that I was going to stop at, but skipped this time.

Heading out of Lake Geneva there is a steep climb and here I passed a lycra clad guy by Geneva Inn on a fancy road bike going uphill. I felt bad for 5 seconds…

Turning onto South Shore Drive, and having ridden this route many times, I knew that there was a series of steep roller coaster type hills. They peak about half way to Fontana and then it is downhill most of the rest of the way. On the way into Fontana, I pass the house of auto auction guy Dana Mecum on the right. This place is beautiful. I expected Jay Gatsby to walk out and ask me if I wanted to grab a high-ball at Chuck’s later.

The town of Fontana is a great place, but they have the worst roads. Be prepared for potholes and divots everywhere. My e-bike has front suspension so that helps in navigating these.

One last steep downhill swoops into Fontana with a view of the lake the Abbey resort. Total time for this journey was 1 hour and 8 minutes. My battery was on 24% when I finished. I did turn it off on some flat parts to preserve it. I used only level 1 of electric assist but on my bike that is pretty strong. One lycra rider was passed (mean). The views were great, the ride had just the right amount of effort and it was a great start to the day.

Next time: The biking beauty called Snake Road (on the north side of LG) that is custom made for e-bikes. This is a Wisconsin Rural Road and is a great add-on to this ride.

2 thoughts on “Rounding Lake Geneva on an E-bike”